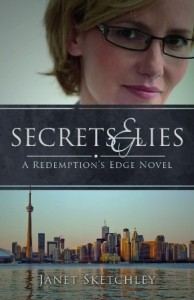 Today’s guest is Carol Daniels from Janet Sketchley’s novel, Secrets and Lies. Carol, thank you for being with us today.

Let’s start out by having you tell our readers a little about yourself.

It’s nice to meet you, Fay. I’m a single mom, husband deceased, raising my teen son and trying to keep a low profile. We’ve had some threats, and I don’t want to be found. <sighs> Except now we may be in danger again. Enough of that. You didn’t invite me here to whine. What can I say about myself? I work in a small café, baking desserts and waiting tables. Art, especially from Impressionist painters like Monet, refreshes my soul. So does a good cup of tea. Peppermint’s my favourite—it smells like freedom. I love classic rock, especially Billy Joel. When I’m stressed, I bake and clean—and I get nightmares.

You have suffered the one loss that I know without a doubt no parent ever wants to go through. Carol, how do you deal with the loss of a child?

I don’t know, Fay. I really don’t know. The one thing that kept me from giving up was I still had Paul. We helped one another, I think. He needed me, so I had to keep going, keep working, and providing for him.

You still have Paul, another son, with you. Is it hard for you to allow him his freedom? If so, how do you manage to loosen the reins on him to let him live his own life?

Paul’s surprisingly well-adjusted, and he’s a great kid. But you know sixteen-year-olds. They think they’re indestructible. He’s not taking this danger as seriously as he should. He keeps his curfew, lets me know where he’ll be, and there’s no sign of drugs. I know what to look for, after Keith. Paul hangs out with his friends a lot, even does his homework with them. So far his grades are okay, and although it’s hard to let him out of my sight, everything seems to be okay. Aside from drugs, the one non-negotiable is music. Listening is fine, but he’s not to play guitar, not to join a band. I want him to grow up to be a responsible husband and dad—not a deadbeat like his father!

I found you an incredibly brave heroine. Your life took a twist—more than once—but you persevered. To what or whom do you credit your resilience?

When anyone you trust will let you down, you can’t break. I’ve never had anyone to rely on, not since my mom died when I was a child. <pause> That’s how it feels, anyway. To tell the truth, I’ve had a few listening ears who’ve made a big difference. Before my son Paul and I fled Calgary, my friend Jackie was great at cheering me up. Now here in my new home, I’ve made phone friends with a late-night deejay, Joey. He’s so welcoming when I call, and he never judges or tells me how to run my life. <snickers> He even says he’ll pray for me, and so far it hasn’t done any harm. Not that I’m in a hurry to try it myself.

Carol, you struggled with prayer. I’d love for you to share those struggles with our readers and then to tell them how that struggle impacted your life.

I believe God is real, but I keep my distance. Prayer hasn’t worked for me. I’m afraid to try it again. I told you my mom died? Well, shortly before that, she “found Jesus” at a tent meeting. My father took it personally, like she was cheating on him. He turned abusive. He didn’t kill her, it was a traffic accident. But he might as well have. Did I pray? All through that time. So did my brother. But Dad didn’t change, and she died. Then my son, Keith… <sniffs, wipes eyes> I’m sorry. It’s been two years now, but some things you never get over. I had a friend, at least I thought she was a friend. Prayer healed her of a brain tumour. Cancer—gone! She taught me how to pray for Keith, said he’d break free. We  prayed it and claimed it. I was so relieved. The next week, Keith was gone. She blamed me. She’d had faith to be healed, so it wasn’t her. My failure killed my son. Joey says God’s not like that. I wish I could believe him, but the stakes are too high for Paul and me. I don’t dare risk prayer. But I don’t think I can handle this on my own. If I break, who’s left for Paul? Or for me?

Thank you for being with us today. I look forward to talking with your author, Janet, on Wednesday.

Thanks for the chance to chat. I didn’t mean to spill so much angst, but it’s been good to have a caring listener.

That’s what Inner Source is all about. Getting to know the heart of the characters and the Truth that drives them. I’m so glad you shared so readily. 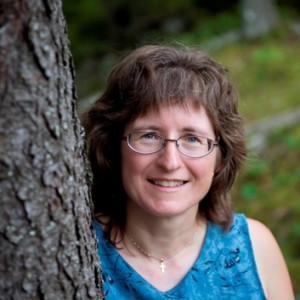