Why a Book About the Prophecies Fulfilled in the Birth of Jesus?

I’m so happy that once again author and friend, Dianne E. Butts, has agreed to be our guest here at Inner Source. I am a fan of  Dianne’s work, especially the book she’s writing about today. Today, Dianne shares why she feels God has given her the desire to share the prophecies of His word. 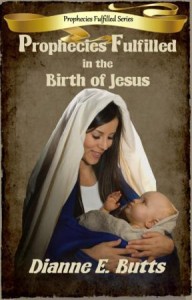 Prophecies Fulfilled in the Birth of Jesus

Some people have asked me, “Why did you feel the need to write books about prophecies?” My answer is because prophecy is the key to everything. And I don’t mean just the key to foretelling the future. I’m saying that prophecy is the way the one true God has proved and continues to prove that He is the only true God. This is a real issue today and, in my opinion, the most basic and urgent issue of human existence: knowing that God exists, and which God is the true God. The true God is the only one who knows the end from the beginning. He is the only one who is in complete control—even when it appears everything in our world is so out of control.

Writing about prophecy—both prophecies that have been fulfilled and prophecy that has yet to be fulfilled—is also about teaching God’s Word (the Bible) to an increasingly biblically illiterate population. As some people and leaders continue to push God out of our society in America, and as other religions continue to become more prominent in other countries, the number of people who have a good grasp on Bible knowledge is shrinking. And yet our God is continually drawing people to Himself. This combined pushing away by people and drawing in by God creates a tremendous opportunity for Christians to share our knowledge of the God of the Bible with an increasing number of people. Contrary to what some would have us believe, many, many people of all nationalities and languages want to know about the true God, and about this God who is becoming increasingly forbidden. My books on many prophecies that have already been fulfilled teach the Bible; they teach the deeper truths that more and more people are searching for.

In my book, for each prophecy we travel back in time to see where in the Bible the prophecy was given, who gave it, when, and in what context. Then we travel forward in time to see it fulfilled. Each chapter includes Scripture readings, my thoughts and comments, questions that apply the timeless truths discussed in the chapter to our lives today, suggested prayers, additional suggested Scriptures to study, and more.

And as I’ve been told many times, my writing is easy to understand and accessible, like sitting down together over a cup of coffee and chatting in everyday language. So whether you’re trying to study and figure things out on your own in the privacy of your own space, or whether you want to lead your family in discovering proven truths in the Bible, or whether you’re already a Christian and long to share with other not-yet believers or lead a group Bible study to deeper understanding of the Bible, this book can help you do that.

I guess I have been a prophecy geek for as long as I can remember. I did not grow up in a strongly Christian home. However even when I didn’t know it, or know God, He was at work causing prophecy to have a profound effect on me.

I attended grade school in the sixties and even then it was common for public schools to hold a Christian-based Christmas program. I believe I was in the fifth grade when I was assigned to recite a Bible verse from memory during our Christmas program. I remember that verse to this day. It was Isaiah 9:6:

“For to us a child is born,

to us a son is given,

and the government will be on his shoulders.

And he will be called Wonderful Counselor, Mighty God,

I grew up thinking those words were written about Jesus. Everybody knows that, right? So imagine my shock when, as an adult, I learned those words were written about 700 years before Jesus was born! How can that be? That can be because the true God knows the end of time from the beginning of time and instructed His writer to write that in advance.

Have you ever wondered why God gives us prophecies? God tells us what he will do in advance for at least three reasons:

As we look into and move into our future, it is important for people to understand that what is happening all around us has been foretold by God. It is equally important for us to look into the past of human history to see that God has foretold events before, and then He brought them about in His perfect timing to fulfill His perfect plan. By looking at past prophecies given and fulfilled, we can see God at work, we can get to know Him and His personality, and we can know in our hearts and minds and with everything that we are that He is trustworthy. This is how we strengthen our faith for the future.

Strong faith in God is vitally important as we move into an uncertain future in our increasingly hostile world. Strengthened faith for the future is what I wish to give my readers through examining prophecies that have been fulfilled in the past.

I’m currently writing the third book (hopefully to be available soon), Prophecies Fulfilled in the Life of Jesus, and am excited to teach about how Jesus fulfills the picture God painted in the living object lesson of the Tabernacle/Temple, how He fulfills the seven Feasts of the Lord, and also some prophetic events that are coming in our near future. I’m speaking of the four total lunar eclipses (which are becoming known at the “Blood Moons”) scheduled for Passover and the Feast of Tabernacles in both 2014 and 2015. The first of these will occur on April 15, 2014. If people do not understand the prophetic significance of the seven Feasts of the Lord, or of prophecies such as Joel 2:31, “The sun will be turned to darkness and the moon to blood before the coming of the great and dreadful day of the Lord,” then they will be completely unprepared for what is happening, just like the people Jesus described in Matthew 24:38-39:

“For in the days before the flood, people were eating and drinking, marrying and giving in marriage, up to the day Noah entered the ark; and they knew nothing about what would happen until the flood came and took them all away. That is how it will be at the coming of the Son of Man.”

Thank you, Fay, for the opportunity to talk with you and your readers about my books. May you each know Jesus ever more deeply through the study of His Word and the story of His birth this Christmas.

Dianne E. Butts has more than 300 published print articles, numerous online articles, has contributed to 19 books including Chicken Soup for the Soul books. 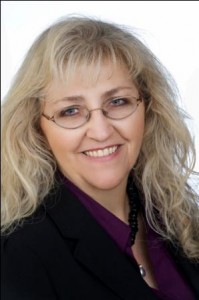 Dianne is a member of Advance Writers and Speakers Association.

Dianne’s books are available at Amazon.com and other online retailers. Find all her books on her Amazon Author page.

Connect with Dianne on:

From: Uncategorized
← Dear America: A Letter of Comfort and Hope to a Grieving Nation
Interview: Rose Chandler Johnson Author of God, Me, and Sweet Iced Tea →
No comments yet