Future of My Heart (Hearts Across Time, Book 2) by LoRee Peery 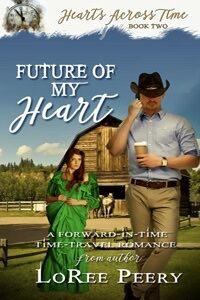 Except for proficient indie authors, the publishing world is not one of instant results. Sometimes years pass, as with my time travels. From idea to release, these two stories spanned six years.

I faced a lot of emotions during that time. Doubts, excitement, fulfillment, waiting, and wondering. Some disappointment as well. Initially, my editor wasn’t enthusiastic over my premise for the first story, so I pitched the idea to an editor with a traditional publisher. She advised making the project historical and using a farm setting. I’d never attempted a straight historical and what’s romantic about a farm? I grew up on one.

Why did I think I could pull off a time travel? I’d only heard of The Time Machine and watched the movie Back to the Future. I searched for clean time travels with cowboy heroes and wasn’t all that crazy about the ones I found.

Once I started writing Cowboy Just in Time, I went on a journey of discovery. Gavin and Mandy took over more than once and surprised me with what happened next. The rancher’s daughter Phoebe kept raising her hand for my attention. I was delighted with the idea of telling her story, since I had no idea at the beginning that there would be two books.

That was a long introduction. Phoebe is spoiled and doesn’t like Mandy at all when she shows up under questionable circumstances. After all, Phoebe has planned her future as the foreman’s wife sure they’d take over the ranch. However, her ideal cowboy had always considered her a pesky little sister type.

Phoebe has a tender heart, but she wants what others have. Once she is certain the cowboy is lost to her, she’s determined to travel to the future. She wants what Mandy has, a love that spans centuries. She discovers the way Mandy traveled and shows up in the 21st century. Rather than displaced, she’s all eyes and ears and eagerness to have all the amenities she believes she deserves.

However, meeting Nolan and the modern world exposes her to one thrill after another. He finally, reluctantly, buys her story, but she’s too eager and independent. Also innocent. A seedy character stalks her. On the positive side, she’d never been exposed to a personal relationship with Jesus. Her journey helps her conclude that Jesus Christ is the same yesterday and today and forever (Hebrews 13:8).

I’m not one to put much humor in my stories, but this strikes me as funny. When I first jotted ideas for brainstorming, I chose Landon as the hero’s name. I realized later that was way too corny, having Phoebe land on Landon’s movie set van.

I added the quip about a zero hero. That term came from the leader of my aqua back rehab class. When she used zero hero in a teasing manner, I knew I had to add it in the movie production somewhere.

The time travel genre can be presented in a variety of ways. I stretched it a bit with visions of past relatives in Hiding from Christmas. I’m taking notes now for my next Christmas time travel novella.

I thank you, Fay, for allowing me to share here on Inner Source. Blessings to your readers, and I’m always open to others’ thoughts on time travel.

More About Future of My Heart:

Nolan Riley can’t believe his eyes when woman in historical dress lands on top of his lighting van while they’re filming a Western. She claims she’s from 1891. He knows he shouldn’t believe her. He’s stayed away from women after a disastrous relationship, but something about the lost look in Phoebe’s eyes makes him feel protective, despite his distrust of women and Phoebe’s unbelievable claim. Against his better judgment, he takes Phoebe home and gets her a job on the movie set.

As they explore their relationship, they discover that old wrongs need to be righted before they can move on. Phoebe’s fledgling faith demands she go back to 1891 Nebraska to ask forgiveness from her family and obligations she left behind. Nolan has to deal with his inability to trust a woman. Separated by time, both are uncertain of their lives, but they throw themselves upon God’s mercy.

But love transcends time. Is their love is strong enough to secure a future together? 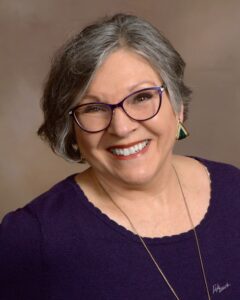 Nebraska country girl LoRee Peery writes fiction that hopefully appeals to adult readers who enjoy stories written from a Christian perspective, focusing on the romance. These include novels and novellas for women and men in the Contemporary, Romance, Historical, Time Travel, and Mystery/Suspense categories. She writes of redeeming grace with a sense of place. Her Frivolities Series and the book based on her father’s unsolved homicide, Touches of Time, are available on Amazon. She is who she is by the grace of God: Christian, country girl, wife, mother, grandmother and great-grandmother, sister, friend, and author. Connect with LoRee through her website, on Twitter, and Facebook. Also, look for other books by LoRee at Pelican Book Group.