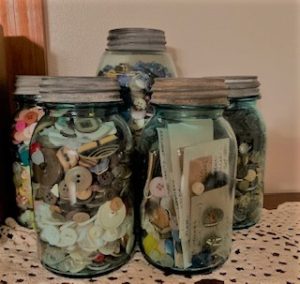 When a friend told me recently that today, November 16, was National Button Day, I naturally thought of my novel Stalking Willow and the button jar that I wrote into the story. Why? Because the button jar was real.

My mother had a button jar that was curiously placed inside a box containing numerous family photos. My mother never said so, but because the buttons were placed with the photos, I believe that they had been given to her by her mother, my wonderful farm-raised, Kentucky born grandmother, whose country-sense has served me throughout my life. For most of my childhood, I was an only child, often lonely, and I would sift through those photos, and I would pour out the buttons and sort them and look at their texture and their design. I still remember the scent of musty, old, glorious buttons. It is a memory that soothes. I recently began collecting buttons again, and I share that particular story with Tracy Ruckman here.

In Stalking Willow, my main character, Willow Thomas, was raised by a grandmother so very similar to 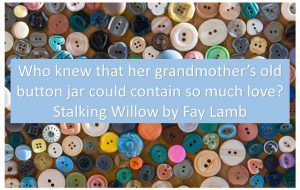 my Grandma New. In fact, I gave so many winks to my numerous cousins that I heard from several of them saying, “You remember that about her, too?”

Willow’s grandmother had been a simple woman who loved her family. She had raised Willow, but something happened that tore Willow’s life apart on the day Willow graduated from school. Her grandmother died as a result, and Willow fled the small mountain town. She is chased back to that town ten years later. She is not only toting her suitcase filled with clothing and followed by a stalker, she’s also carrying around a truckload of bitterness.

Willow’s journey to healing begins when she discovers a box of photographs and a button jar in her granny’s closet. Sound familiar? The buttons, though, are not the only thing she finds. She discovers something else from her grandmother, and Willow begins to understand that things are not always what they seem and that she needs to learn to forgive and to chop down the roots of bitterness.

I’ve discovered through readers of Stalking Willow that I’m not the only one with memories buttons. I’d love to hear from readers today. What special memories do you have of a particular button or a button jar?

Fay Lamb is the only daughter of a rebel genius father and a hard-working, tow-the-line mom. She is not only a fifth-generation Floridian, she has lived her life in Titusville, where her grandmother was born in 1899.

Since an early age, storytelling has been Fay’s greatest desire. She seeks to create memorable characters that touch her readers’ heart. She says of her writing, “If I can’t laugh or cry at the words written on the pages of my manuscript, the story is not ready for the reader.” Fay writes in various genres, including romance, romantic suspense, and contemporary fiction.

Tags: Authors, buttons, National Button Day, special memories
From: Special Events
← One Word at a Time, Sweet Jesus by Anna Kittrell
Who’s Got a Button? by Tracy Ruckman →
No comments yet