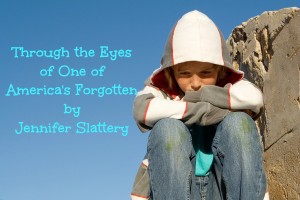 I was completely blind-sighted and leveled, for some time to come. In fact, I’m not sure the ache God started years ago has ever left. That ache of knowing, really knowing, and feeling completely and utterly inept. More than that, of wrestling with what God might be calling me to do, and yet, erecting barriers to obedience before the prayer concludes.

Double-minded. Partially surrendered. Angered by the injustice of it all yet paralyzed by fear, selfishness, and uncertainty. Some problems seem just too big to tackle, and yet, God—the infinite, all-powerful, all-knowing, sovereign God, has a plan. If we’d but tune our ears and step out in obedience, to whatever He calls us to do. For some that means opening our home to broken children. For others that may mean acting like a support for friends who’ve answered the call to foster. The opportunities to help are endless.

And the need, urgent. There are so many reasons we can say now, but there’s a huge and pressing reason to say yes.

Through the eyes of one of America’s forgotten:

Kraigen stood in the doorway holding a large garbage bag that wasn’t even half full despite the fact that it carried absolutely everything he owned. Clenching his jaw, he braced himself for the worst. Based on the sappy faces and wide, almost teary eyes that stared back at him, this was gonna be one long night. He pretended to listen to the high-pitched chirping that pricked his ears, but in reality, his mind was a million miles, and neighborhoods, away.

He knew the drill. They were happy to have him, wanted him to feel at home, yah-da, yah-dah, yah-dah. He’d heard all that before. And he’d pretend to buy it, for now. Until they shipped him off somewhere else. Because they always did. This was his third home this year, the tenth home since those high-and-mighties down at children’s services shipped him off five years ago when they found his mother passed out on the living room floor, a used heroine needle dangling from her limp hand.

“Can I take your…um…bag for you?” A lady with a way too big smile and mascara caked eye-lashes asked, reaching for Kraigen’s things.

He jerked away instinctively and clutched the smooth plastic to his chest. The woman’s eyes went wide. The man beside her, tall with a thick shaggy beard and thick glasses, started to move forward. When Kraigen looked directly into the man’s eyes and squared his shoulders in his best, “Wanna piece of me?” stance, the man slackened and stepped back.

“Are you hungry?” The woman’s voice was shaky. “I made spaghetti and meatballs. Come with me.”

Kraigen followed reluctantly into a brightly painted kitchen with pink and purple flower curtains. A large, round table laden with salad, milk, steamed vegetables and hot spaghetti sat in the center of the room. Hen tightened his throat to stop his nose from inhaling the aroma of Italian sausage and roasted garlic. Last thing he needed was for his stomach to go growling like some wild animal. Yah, he was hungry. So what? He’d been hungry before, and he’d be hungry again. One hot meal, and a few nights in some Beaver-Cleaver home really wasn’t going to make that much of a difference. It was all temporary, despite their lofty promises.

“Here, have a seat.” The man pulled out a chair and patted the cushion.

Kraigen glanced at the clock. How long were these charades going to go on? But that was how the game was played. They’d do their part, give him a few hot meals, tell him how special he was, that it wasn’t his fault his mom was sick, like they had any idea what they were talking about. But then he’d mess up, or they’d get tired, whatever, and he’d be shipped off somewhere else.

“Like spaghetti?” The lady shoved a steaming hot plate piled high with soft noodles and dripping sauce in front of his face. “I made this just for you.”

An image of his mother passed out on the vomit-stained carpet, her thick, matted hair spread out across the maroon fibers like clumps of wool, flashed through his mind.

He cleared his throat to keep his tears at bay. “Thank you,” and began to push the noodles around his plate with a shiny silver fork.

The man with the thick glasses pulled up a chair, sat beside him and nodded for the lady to do the same. Kraigen pretended not to notice the pathetic looks of sympathy that were etched in their middle-class faces. It was like they were watching some mutated cat trying to lap up a pile of spilled milk.

“I know this is hard for you—”

Yah, right. You and your pretty little white picket fence and two-car garage? You don’t know And I know you won’t stick around long enough to find out. No one does. 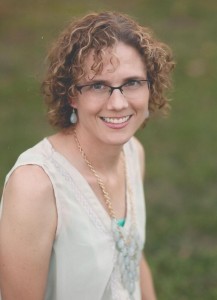 Jennifer Slattery writes soul-stirring fiction for New Hope Publishers, a publishing house passionate about bringing God’s healing grace and truth to the hopeless. She also writes for Crosswalk.com, Internet Café Devotions, and the group blog, Faith-filled Friends. When not writing, Jennifer loves going on mall dates with her teenage daughter and coffee dates with her handsome railroader husband.

Visit with Jennifer online at JenniferSlatteryLivesOutLoud. 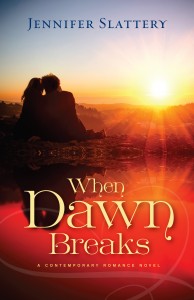 More About When Dawn Breaks:

As the hurricane forces Jacqueline to evacuate, her need for purpose and restitution motivate her to head north to her estranged and embittered daughter and into the arms of a handsome new friend. However, he’s dealing with a potential conspiracy at work, one that could cost him everything, and Jacqueline isn’t sure if he will be the one she can lean on during the difficult days ahead. And then there are the three orphans to consider, especially Gavin. Must she relinquish her chance at having love again in order to be restored?

When Dawn Breaks is also available at Barnes and Noble and Christian Book Distributors. 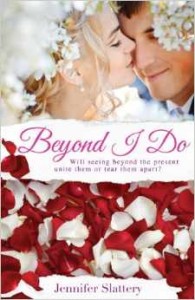 About Jennifer’s First Novel, Beyond I Do:

Will seeing beyond the present unite them or tear them apart?

Marriage … it’s more than a happily ever after. Eternally more.

Ainsley Meadows, raised by a hedonist mother, who cycles through jobs and relationships like wrapping paper on Christmas morning, falls into a predictable and safe relationship with Richard, a self-absorbed socialite psychiatrist. But as her wedding nears, a battered woman and her child spark a long-forgotten dream and ignite a hidden passion. One that threatens to change everything, including her fiancé. To embrace God’s best and find true love, this security-seeking bride must follow God with reckless abandon and realize that marriage goes Beyond I Do.