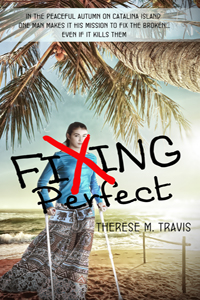 Robin, you’re an island girl. Would you mind telling our readers a little about your life on Catalina Island?

I live with my grandmother in a beautiful house just a few blocks from the downtown area, nestled around Avalon Bay. Lucky for me, I don’t have to climb any mountains to get to the house, since I have only my golf cart to get there. I design and sew dolls for a co op gift shop, and I’m active in my church and with this great sports team. Everyone on the team has some sort of disability, but we don’t let it keep us from having a great time.

You’re an amazing woman. You live with disabilities, and you strive to help others. I know the title of Therese’s novel refers to you (without giving anything away), but I’d like to know from your perspective just how you view your disabilities.

I have disabilities? LOL. It’s something I’ve always had to deal with. Sometimes it frustrates me, a lot, but most of the time I’ve figured out a way around them. Some people seem to think I’m less of a person because I’m not exactly like everyone else. All I can say is, they’re wrong. If they want to find out why, they have to get to know me.

Your story is a suspenseful one, and I can just imagine the range of fears that you went through dealing with what was taking place on the island. How did you manage to even step outside your house?

God was with me every step of the way. He always has been. But yes, there were times when I was terrified. Sometimes I just had to close my eyes to what could happen and focus on what I needed to do. Just like in real life.

I fell in love with the hero of the story, Sam. He’s a topnotch guy. What would you say is Sam’s most redeeming quality—besides his heroism?

I fell in love with Sam, too! I think his best quality is that, while he has always acted as though I’m not disabled (at least most of the time), when he needs to, he just steps in and makes things happen for me. He’s always there for me.

You’ve been through a lot. What would you say is the most important precept you have learned through this ordeal?

I learned that I’m ok just as I am. I’m not less-than, less worthy, than anyone else. And I don’t need to be fixed!

In the community of Avalon on Catalina Island, a psychopath is kidnapping children and perfectly posing and painting the bodies of adult victims to resemble disabled artist, Robin Ingram.

Robin struggles with feelings of imperfection, and knowing some madman has a macabre agenda—which includes fixing her—is unsettling. She’s relieved when paramedic Sam Albrecht steps up to help.

Sam believes he knows the identity of the killer, and he wants nothing more than to prove it in order to keep Robin out of danger. Then Sam is arrested as a suspect for the crimes, and Robin’s life is thrown into a fresh whirlwind. She may not know who the real killer is, but she does know Sam is innocent…and she will find the proof to set him free, or she’ll die trying. 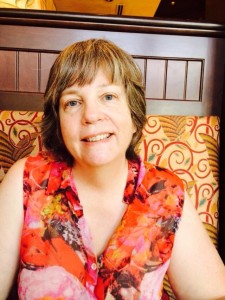 Therese M. Travis is a wife, mother, grandmother, follower of Christ. She’s been writing stories since the age of eight, and “telling stories” (you know what that means) since long before. She finally figured out how to put those stories onto the page. She loves to talk about Jesus and His love for us, about her family, crafting, writing, and praying. You can connect with Therese at Pinterest and on Facebook.

Therese, thank you for being here today. I loved Annabelle’s story because my favorite heroes and heroines are those that are not absolutely perfect. In Annabelle’s case, her flaws are physical, and she sees herself as flawed and not at all the way God sees her. This flaw prevents her from truly living. Have you ever known anyone who suffers from what they would consider a physical flaw and allowed themselves to be ruled by their own fears of what others see in them?

Other Works by Therese M. Travis:

Therese is the author of some of my favorite works: 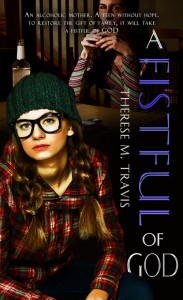 A Fistful of God:
Note from Inner Source: I not only rate this novel among my top five young adult novels. I rate it in my top five all-time favorites. This story is for audiences of all ages.

She’s never taken a drink, but she’s recovering from alcoholism all the same.

After the death of her father, teenager Aidyn Pierce spends all her time cleaning up her mother’s messes. So when Mom announces she’s getting sober, Aidyn doesn’t believe her. Mom has tried before, and Aidyn knows there will come a time—a day, a week, maybe even a month from now—when the cravings will be too much, and her mother will start drinking again. So, when Aidyn is encouraged to attend support meetings, she refuses. No point in wasting her time when her mother’s going to drink again, anyway.

But what Aidyn doesn’t count on is the healing power of love and friendship, and the incredible strength of God to walk both mother and daughter through the dark valley of addiction and recovery.

Annabelle Archer has been crushing on Rick Stockton for years. And now, when he notices her, it’s only because her brothers and sisters make it impossible for him to miss her. Annabelle still hasn’t decided if God’s will means she spends her life taking care of her six siblings, or if He has more in mind for her.Rick Stockton doesn’t mind that church activities and Annabelle’s brothers and sisters keep throwing Annabelle and Rick together. He just isn’t sure what it means. But as the kids keep trying to turn Rick into a snow angel—with sugar, baby powder, and more—he’ll work on figuring it out. Spending time with Annabelle’s family gives Rick a longing for one of his own…and an idea to make it happen.This Christmas, Annabelle may just find there’s a special angel in her corner, one that will stick around for a lifetime. 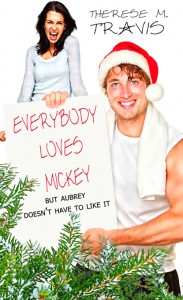 He’s a saint with a tarnished halo, and Aubrey Thomas can’t stand him…or can she?

Handsome fireman, Mickey Hurst is loved by all. He volunteers at the local parish where Aubrey Thomas works as an administrator. He sings in the choir. He leads the youth group. He even acts as the church handyman, but Aubrey knew him before he became Saint Mickey—when he told her he’d have to be drunk to kiss her…and he was. What’s so infuriating is that despite his horrible admission, Aubrey loves Mickey as much as everybody else.

Mickey doesn’t blame Aubrey for disliking him. After all, he kissed her when he wasn’t sober—and insulted her, to boot. Aubrey deserved a better man—a Godly man. But, since that fateful kiss, Mickey’s drawn closer to the Lord. With the intercession of God and the matchmaking parish staff, Mickey prays that this Christmas he will be able to prove to Aubrey he’s now the man for her.