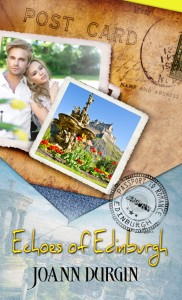 Fay Lamb asked me in her interview of me earlier this week: Shelby has a not-so-small decision to make about her future, and I know that you, in your own way, have also made that type of decision. Of course, it’s a different scenario, but I have to wonder if during the writing of Echoes of Edinburgh, if you were conscious that you might be making a decision that affected your future? If so, was there a Scripture or a Biblical precept that either you or your character leaned upon in making that decision?

In the editing process of Echoes of Edinburgh, something I’d been pondering for years began to transition into reality. Put it this way: a number of things happened over the course of the past year to pave the way for a huge, life-changing step. In mid-August of this year (Echoes of Edinburgh released in late September), I took a huge leap of faith in *retiring* from my full-time estate administration paralegal position to become a full-time author.

I’d hoped, I’d prayed, but I’ve also worked hard toward making it happen. In other words, while I placed my full trust in the Lord to guide my future, I didn’t sit back and say, “Lord, please make this happen for me.” From the beginning of my writing journey, the Lord has been right there beside me. Each and every time I sit down to write, I pray before I type the first word.

In some cases, events that happened to bring this momentous step possible, both personally and professionally, were almost unbelievable—events that could never have been predicted by any measure of my imagination. Among them: an unexpected financial gift, my predecessor returning to the Louisville area and to the law firm, and my now ex-publisher turning over the copyrights to me for my Lewis Legacy Series early in the year. Since then, due to well-placed advertising and targeted marketing, the sales (and thus my royalties) have dramatically increased.

Not long after my retirement from the law firm, my husband, Jim, and I traveled to New England for his 35th high school reunion in Newport, Rhode Island. As part of that trip, we traveled to Boston to visit with friends (we lived in the Boston area for eight years) and attended a baseball game at Fenway Park. During the Red Sox game, an older gentleman sat near us. He repeatedly apologized for having to displace me; I sat on the end of the aisle and had to get up several times so he could go buy food and snacks for his family members. After the third or so such time, he brought a soft pretzel for me with mustard (how did he know)? Not long after, he came over to sit in an empty seat near us. We talked, he got to know us, and then he shared about his life with us. He’s a retirement age doctor from New York who lives in Boston during the week and works for a nonprofit health care agency. “Doc Duke” listened to my story and said something I’ll never forget. This is what he said: “I wouldn’t look at it so much as a leap of faith, but more one of following the Lord’s plan for your life.”

Since my retirement, I was also blessed to attend the annual American Christian Fiction Writers annual conference in St. Louis. I had not planned to go this year and had no plans to attend. Four days before the conference, I had a fully-paid conference registration and a hotel room—these things pretty much dropped right into my lap! That’s another story in itself, but the Lord made it clear He definitely wanted me there. And what a blessing that experienced proved to be, especially when the winner of one of the pre-published author contests thanked me from the podium in her acceptance speech. If there’s anything I love more than writing, it’s encouraging other authors.

My writing is a ministry, and the Lord has blessed my efforts. Based on notes I’m receiving from readers, my stories are touching hearts and positively impacting lives with truths from God’s word. What’s exciting for me is how even the “little” things in my stories can impact someone for good. That’s so awesome! Imparting how great a relationship with the Lord can be and portraying His mercy, great love and hope through my characters and their stories is my primary goal.

The following two verses of scripture are oft-quoted and well-loved, but they’re verses I have clung to, especially in making this important, life-changing decision:

Proverbs 3:5-6 “Trust in the Lord with all your heart and lean not on your own understanding; In all your ways acknowledge Him, and He will make your paths straight.” (NIV)

Jeremiah 29:11 “For I know the plans I have for you,” declares the LORD, “plans to prosper you and not to harm you, plans to give you hope and a future.” (NIV)

I like Doc Duke’s theory, and I’m eagerly anticipating what the Lord has in store for my future writing ministry. For now, I’m loving every single moment of this fascinating journey! 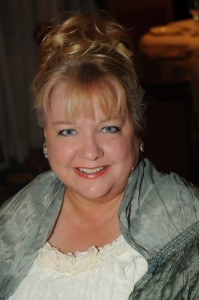 More About the Author:

JoAnn Durgin is the author of five novels in the popular Lewis Legacy Series as well as the Amazon bestselling Catching Serenity. Her novellas include Meet Me Under the Mistletoe, Starlight, Star Bright, Sleigh Ride Together with You (coming for the 2014 Christmas season), and Echoes of Edinburgh. A member of the American Christian Fiction Writers and the Louisville Christian Writers, JoAnn lives her husband and three children in southern Indiana. She’s recently *retired* from her paralegal position to write full-time. She loves to hear from her readers at www.joanndurgin.com or  www.facebook.com/authorjoanndurgin.

More About Echoes of Edinburgh:

To honor her dying father’s wish, Chicago stockbroker Shelby Harmon promises to hand deliver an envelope addressed to “Robert Nichols, Personal & Confidential.” Her quest to find Robert leads her to a most unlikely place—the Castlehill Gardens outside Scotland’s Edinburgh Castle. Who is this fiercely private man and what is his connection to Harmony Lane, her family’s horse farm in Lexington, Kentucky?

Harrison Reed cautions Shelby against dredging up hurtful memories for his close friend, Robert. As they explore the city together, Shelby and Harrison find themselves increasingly drawn to one another. When the contents of the mysterious envelope are revealed, the answer gives her hope for the future of Harmony Lane. Is the time spent in Edinburgh with Harrison destined to be nothing more than a beautiful memory? Did Shelby lose her heart in Edinburgh…or find her way home again?